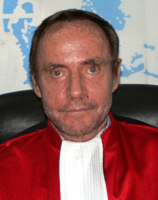 Vagn Joensen is the President of the International Criminal Tribunal for Rwanda at the UN. He has been a member of the tribunal since 2007. Before that, starting in 1994, Joensen was a justice on the Danish Supreme Court, and from 2001 to 2002, he served as an international justice on the UN Mission in Kosovo. He acquired his legal education at the University of Aarhus, City of London College and Harvard University. Joensen has also worked at the Danish Ministry of Justice and taught at the Universities of Aarhus and Copenhagen.