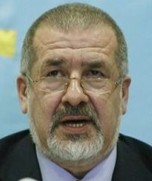 Member of the Ukrainian parliament, the president of the World Congress of Crimean Tatars

He is a Crimean Tatar who grew up in Uzbekistan where he was deported at a young age and he has spent his entire life fighting for the rights of the Crimean Tatars. He acquired his education from the Moscow State Historic Archive Institute and worked for years at the State Archives in Riga. Chubarov belongs to the Mejilis of the Crimean Tartar People and has been its president since 2013. He has served repeatedly on the Supreme Council of Crimea (and been its deputy chairman) as well as in the Ukrainian parliament.