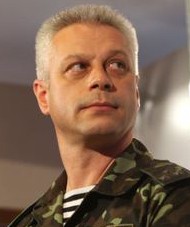 The spokesperson of the National Security and Defence Council of Ukraine for ATO issues (ATO= Anti Terror Operation). Previously, he worked as an adviser to the National Security and Defence Committee of the Ukrainian parliament. In 2008, he left active military service with a rank of reserve colonel. Prior to that, he worked as the information officer for the Ukrainian peacekeeping unit in Croatia, Kosovo, Sierra Leone, Lebanon, Kuwait and Iraq. During his active service, he worked in the press office of the Ukrainian Ministry of Defence and information service of the Ukrainian Navy. He acquired his education at the Lviv Military Institute, where he studied public relations and journalism in the military. He has received many acknowledgements and awards, including the title of Ukraine’s Most Outstanding Journalist.