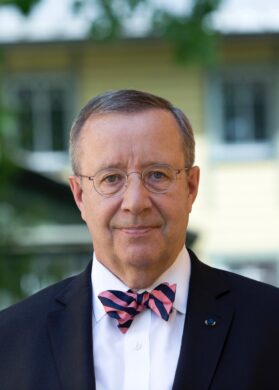 Toomas Hendrik Ilves was born into a family of boat refugees in Sweden. He has lived and worked in five countries. Educated at one of the best universities in the USA, Columbia University, he later worked as a journalist and politician. In 1993-1996, Ilves served as the Estonian Ambassador in Washington, and as the Minister for Foreign Affairs during 1996-1998 and 1999-2002. Between 2004 and 2006, he was a Member of the European Parliament. Ilves was the President of the Republic of Estonia in 2006-2016. From 2019, Ilves is a Member of the Advisory Board of the Centre for Technology and Global Affairs at Oxford University. He is also on the Board of the Free Russia Foundation and in 2020, Ilves joined the Centre for European Policy Analysis and became a member of the World Health Organisation`s Pan-European Commission on Health and Sustainable Development.