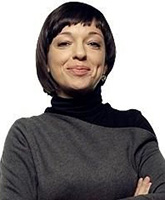 Maria Makeeva is a Russian journalist, radio and TV presenter. Worked for over ten years in the Russian News Service at Russian Radio (Russkoye Radio). Thereafter, she became a news anchor and later the deputy general director of the Russian Media Group. She hosted the programmes People to People, Russian Holiday, Reader, and from 2005 to 2007, Let’s Talk that grew into a three-hour-long morning show on the Russian News Service. The radio show was raided and shut down by the state in 2007. From 2007 to 2010, she worked at the radio station Serebrennoy Dozhd, hosting the programme Business Environment. Since 2010 Maria Makeeva has been the deputy director of Dozhd, an independent Russian television channel and the host of the daily news show Makeeva, Makeeva. The Evening Show, the political show For Whom and various other topical political and election-related