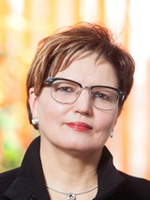 Mall Hellam is an activist in the Estonian cultural and kindred peoples’ movements, who had run the Open Estonia Foundation for a long period. She was educated as a philologist and has also graduated from the Estonian School of Diplomacy. She is one of the founder of the kindred peoples’ movement and the Estonian-Hungarian Society, as well as a founder of the Network of Estonian Non-profit Organisations. Both Estonia and Hungary has honoured her with awards, and the European Union named her European of the Year in 2010. Hellam is Hungary’s Honorary Consul in Estonia.