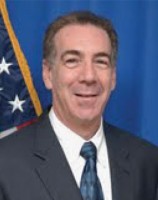 Jeffrey D. Levine was nominated as U.S. Ambassador to Estonia on February 17, 2012. Prior to this date he had been the State Department’s director of Recruitment, Examination and Employment since September 2010, and Deputy Chief of Mission/Chargé d’Affaires at the U.S. Embassy in Budapest, Hungary from 2007 to 2010. Joining the Foreign Service in 1985, he is a member of the Senior Foreign Service with the rank of Minister Counselor. He holds a Bachelor’s degree in journalism from California State University, Humboldt and a Master’s degree in Resource Strategy from the National Defense University in Washington D.C. He has received numerous Department of State awards as well as the Golden Laurel Medal, presented by the Government of Bulgaria.