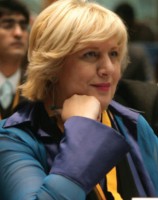 Dunja Mijatovic of Bosnia and Herzegovina was appointed OSCE Representative on Freedom of the Media on 11 March 2010. She is one of the founders of the Communications Regulatory Agency of Bosnia and Herzegovina and was also involved in setting up a self-regulatory Press Council and the first Free Media Helpline in South East Europe. In 2007 she was elected Chair of the European Platform of Regulatory Agencies. Previously, she chaired the Council of Europe’s Group of Specialists on freedom of expression and information in times of crisis. As an expert on media and communications legislation, she has worked in Armenia, Austria, Iraq, Jordan, Montenegro, Serbia, Slovenia, Morocco and the United Kingdom.