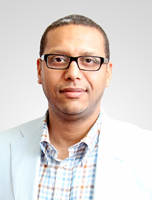 Ahmed Samih Farag is a civil society activist, who is co-founder and director of the Andalus Institute for Tolerance and Anti-Violence Studies. He is also the managing director of the Horytna radio station. Both the institute and the radio station are located in Egypt, where both have been prominent fighters for democratic values and national sovereignty during the Arab Spring. Previously, Farag worked as a project manager at Democracy University (2003-2004), which was opened in Egypt to support development. He has also been a journalist for Al Bedaya (2002-2003) and helped to start up several third sector institutions. He received a university education in political science in Egypt.