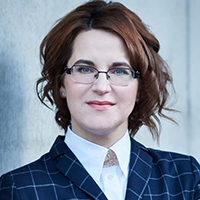 Liisa Pakosta has been working as the Gender Equality and Equal Treatment Commissioner since 2015. From 2009 to 2015, she was a member of the Riigikogu (Pro-Patria) and belonged to the Social Affairs Committee, the Education Committee, and the European Union Affairs Committee. She has been a member of the Human Rights Support Group, chairman of the Estonian delegation to the Parliamentary Assembly of the Council of Europe, which defends human rights, as well as a member of the Council’s Committee on Equality and Non-Discrimination. Previously she was a representative on the Tallinn City Council and been responsible for educational and ethnic issues in the city government. Pakosta graduated with an MA in Philosophy from the University of Tartu.