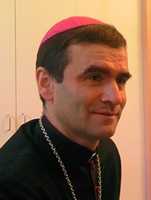 Bishop Philippe Jourdan is the Vice President of the Estonian Council of Churches (since 2004). In March 2005, Pope John Paul II appointed him Titular Bishop of Pertusa and Apostolic Administrator of Estonia, and he was consecrated in September 2005. He acquired a higher education as an engineer (in Paris) and later as a theologian (in Rome). He was ordained as a Roman Catholic priest in 1988. From 1988 to 1992, he worked as a chaplain in Paris, and from 1992 to 1996, as a spiritual advisor in the Prelature of Opus Dei in France. Since 1996, Philippe Jourdan has lived and worked in Estonia, where he was appointed Vicar General and served as a parochial vicar in Tallinn. Bishop Philippe is currently completing a doctorate in analytical philosophy.