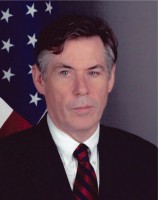 Douglas Davidson became Special Envoy for Holocaust Issues in April 2010. From 2004 to 2008 Mr Davidson was Head of the Organization for Security and Cooperation in Europe’s (OSCE) Mission to Bosnia and Herzegovina. Immediately prior to that, Davidson was Deputy U.S. Representative to the OSCE in Vienna. From late 1989 until early 1993 he was an Assistant Press Secretary for Foreign Affairs at the White House. His other overseas diplomatic assignments have included Kosovo, Zagreb and Belgrade and Peshawar.