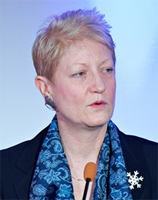 Riina Kionka is the Head of the Central Asia Division of the European External Action Service (EEAS). She received her bachelor’s degree in international relations and German from Michigan State University and her doctorate in international relations from Columbia University in New York. She has worked as an analyst at Radio Free Europe and later moved to the Estonian Foreign Ministry, where she headed up the Political Department and was the Undersecretary for EU affairs. She was also Estonian Ambassador to Germany. In 2005, she started work at the Council Secretariat of the European Union, focusing on issues related to the United States, counter terrorism, the United Nations and human rights. From 2007 to 2010, she was Javiar Solana’s Personal Representative for Human Rights. Between 2010 and 2012, Kionka headed up the EEAS’s Division for Human Rights Policy Guidelines. She has written extensively on the security of the Baltic states and Europe generally.