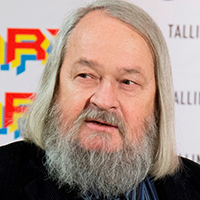 Estonian artist, architect and poet, Professor Emeritus of the Estonian Academy of Arts

Leonhard Lapin’s activities in the fields of Estonian art and culture have been extensive. He has worked as a fine artist and an architect, and spoken up about topics related to cultural theory and current events. He has written prose and poetry, and as an educator, has influenced many art students. He acquired an education in architecture at the State Art Institute of the Estonian SSR between 1969 and 1971. However, while he was still a student, he was attracted to fine art and performance art. Lapin can be considered to be the father of Estonian happenings, the flagship of avant-garde art. Internationally, it was his graphic art, which dealt with the merger of human and machine as a contemporary conflict between human and technology, that created a sensation. Lapin can also be considered to be a promoter of Estonian Pop Art. He and other innovatively minded young artists created a group call SOUP69, which copied examples of Western modern art and interpreted American-style pop culture into the local context. Since the 1990s, Lapin has been focused on his concept of ‘suprealism’, which comments on the impact the consumer society has on culture. Lapin is still active today and his works can be found in many famous art museums and private collections.