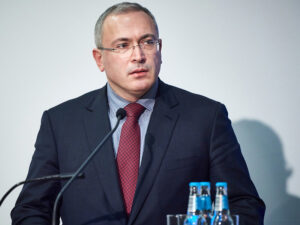 The Founder of the Open Russia movement

Mikhail Khodorkovsky is the founder of the Open Russia movement. Khodorkovsky was the Head of YUKOS, one of the world’s largest oil producers. A pioneering philanthropist, he established the Open Russia Foundation in 2001 with the aim of building and strengthening civil society in Russia. In 2003 he was arrested and charged with fraud, however there was a widespread international concern that the trials were politically motivated. Today he lives in London and advocates an alternative, ‘post-Putin’ vision for his country: a strong and just state, committed to observing human rights, free and fair elections, and the rule of law.