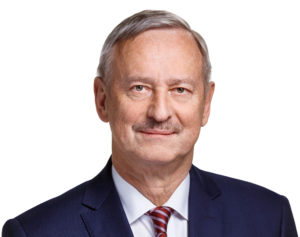 Vice-President of the Riigikogu

In 2004–2014, Siim Kallas served as the Vice President of the European Commission. He was also the European Commission Commissioner for Transportation and Commissioner for Administrative Affairs, Audit and Anti-fraud. Kallas has been the Governor of Eesti Pank, Prime Minister of the Republic of Estonia, Minister of Finance, Minister of Foreign Affairs, Member of the Supreme Council of the Soviet Union and member of the Riigikogu. Kallas is a founding member of the liberal party Estonian Reform Party; in 1994–2004, he was the leader of the party. In 2010, he established the Kristi and Siim Kallas sub-fund of the Estonian National Culture Foundation to support introduction of Estonian history via theatre arts. He has published a number of books, including “Vabaduse ja kurjuse vahel. Euroopa Liidu lugu“ (2018, Between freedom and evil. Story of the European Union).