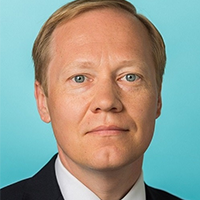 Estonian Undersecretary for Political Affairs at the Ministry of Foreign Affairs

Paul Teesalu is a very experienced Estonian diplomat, who before assuming the position of Undersecretary for Political Affairs at the Ministry of Foreign Affairs in 2017, headed up the ministry’s Political Department. He has been the Estonian Ambassador to Egypt, represented Estonia at the League of Arab States, and from 2013 to 2025, been Estonia’s first ambassador to the African Union. Previously, Teesalu headed up the Office of Security Policy and Office of International Organisations at the Ministry of Foreign Affairs. He was worked at the Permanent Mission of Estonia to the OSCE, and as Permanent Representation of the Republic of Estonia to NATO in Brussels. Teesalu graduated from the University of Tartu with a degree in theology and he is also an alumni of the Estonian School of Diplomacy.