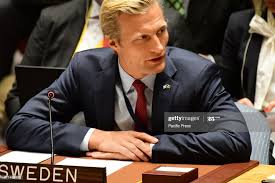 Carl Skau is Deputy Director General and Head of Department for UN policy, Conflict and Humanitarian Affairs at the Swedish Ministry for Foreign Affairs. Before taking on this position he was ambassador and special envoy to Venezuela. He served as ambassador and Deputy Representative to the UN Security Council in 2017-2018 and headed the Swedish campaign to Security Council in 2015-2016. Previous positions include Deputy Representative to the EU PSC in Brussels, Deputy Head of the EU Mission in Zimbabwe and Counsellor at the UN Mission in New York. Before joining the Swedish Foreign Service, he worked for the UN in Africa and Latin America.