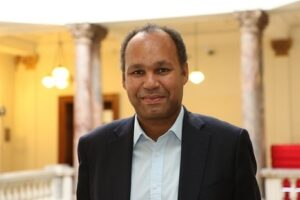 James Kariuki was appointed Multilateral Policy Director at the Foreign & Commonwealth Office in August 2018. He was Director of Diplomacy 20:20, the FCO’s change programme, from July 2016 to August 2018.
Previously James spent 4 years as Counsellor, British Embassy, Washington, where he led government work across the US on politics, communications, economics and global issues. Between April 2007 and July 2012 he held a number of Senior Civil Service roles in London: Head of Policy Planning and Europe Directorate (External), both FCO; and Deputy Director at the National Economic Council Secretariat (Cabinet Office) during the financial crisis. His previous overseas postings were to the UK Mission to the UN, the British Embassy in Caracas, and on secondment to the UN Weapons Inspection team in Baghdad.